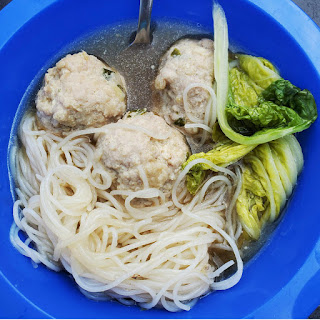 Cooking new and exciting recipes is hard when limited by the heat and ingredients that may or may not be available at the store.  Throw in a small town store and the limits become even higher.  Sure, everything can be ordered off the internet but at what cost?  When a new recipe is found the first thing reviewed is the list of ingredients, especially Asian foods.  Fish sauce, dark soy, bean paste, rice vinegar, shoaxing wine, anise, various fresh peppers.  Luckily enough, Asian ingredients can easily be substituted so when Chicken Lionhead Meatball Soup was discovered and only need one substitution it had to be added to the list of new recipes.  Even better that while it was a soup and it is hot outside, the prep time and cooking over the heat was minimal and quick.
Modifications Made:
Panko crumbs were not needed to keep meatballs together therefore were omitted.  Black pepper was added to the meatballs for some spice as there was none elsewhere.
Scaled for Likability: Great
In reading about Lionhead Soup, the meatballs were originally made with beef or pork or both, never chicken.  The beef or pork made for a richer broth to flavor the noodles.  Where I could see the advantage of a richer broth, one could easily swap homemade chicken broth with homemade beef broth or a combination of both.  Cooking the meatballs in beef broth would change the flavor slightly but not enough to deter from the simplicity of this dish.
Simplicity was the key element to the this soup but it was not lacking in flavor.  In fact, the only thing missing from the soup was those crunchy fried wonton strips served at Asian restaurants when ordering hot and sour soup.  The crunch would have offered a nice texture to the soup.  Keeping the noodles separate meant leftovers would have been just as good or even better as the meatballs and broth flavors would have had even more time to meld and become one.
When making again, a whole nub of ginger will be added to the chicken stock along with a fine diced shallot onion.  Allowing the chicken stock to cook with all the listed ingredients plus the additional ginger will result in a stronger ginger flavor without the bit of the ginger itself.  Meatballs the size of lionheads is fun and different but for the ease of eating, bite size meatballs will be used instead.  With the use of an ice cream scoop, making the meatballs and plopping into the well seasoned broth will be easy.  Or use of an ice cream scoop and dropping onto a cookie sheet to freeze before adding to broth will be easy, too.  So many options so little time.