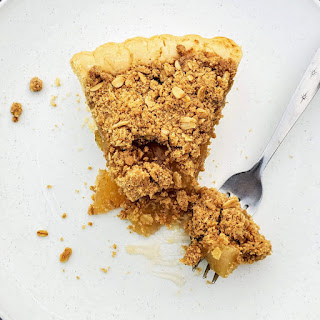 To make Shepherd's Pie, both refrigerated roll and one frozen pie crusts were purchased along with two cans of apple pie filling.  With dinner made using the two rolled pie crusts, I now only had one frozen pie crust to make apple pie.  Combining the cooking instructions from Mrs Smiths Deep Pie Crust for a one crust pie along with the dutch toppings from Betty Crocker Dutch Apple Pie, I created the most perfect semi homemade apple pie.  Let it be known during the holidays when given the choice between apple and pumpkin pie, pumpkin pie even without Cool Whip wins hands down.

Modifications Made:
Streusel topping on premade apple pie filling seemed to be too sweet.  Half cup brown sugar replaced two-thirds cups brown sugar and a quarter cup of flour was added to offset the sugar content.  Without the extra flour, I was worried the streusel would be a buttery mess.