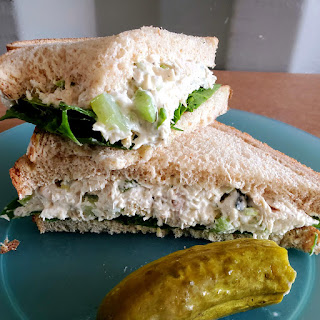 Dinners.  Since starting, most of the new recipes have been for dinner.  As stated before, breakfasts are not a thing here and lunch is usually leftovers or whatever one can scrounge up.  Trying to change the routine up a bit, a Cucumber Dill Chicken Salad for lunch was tested and approved.

Modifications Made:
In addition to dill weed, one teaspoon of dill seeds were added along with one cup finely diced celery.  Mayo replaced half the yogurt.

Scaled for Likability: Good
Well, it was not great like the the most beloved Turkey Salad but it definitely good.  It could even be made great with a few alterations.  One: sliced cucumbers should be added to the sandwich and not the salad.  If not serving on a sandwich, the diced cucumbers would have been fine.  Two: fresh boiled chicken breasts from the bone would give this salad a more robust flavor.  When boiling the breast bones with meat, half of a small yellow onion, salt and pepper should be added to the stock.  Three: instead of dill weed, finely diced dill pickles would give an additional crunch to the salad along with the celery.  Maybe a quarter cup of diced pickles and half teaspoon of dill seed.  Four: nothing to with the salad but it would improve the overall taste would be a better, hardier bread.  A bread with oats and nuts and seeds.  This was lilly plain white bread and the salad was too much for the bread to handle.  Finally Five: in lieu of bread a bed of crunchy greens would be a better alternative with whole grain nutty crackers served on the side as eating vessels.

Can't wait until the next time a whole chicken needs to be boiled, a small portion will be saved for the modified ingredients.  No bread, just chicken salad over bed of greens with hearty crackers or pita chips.  Yum!