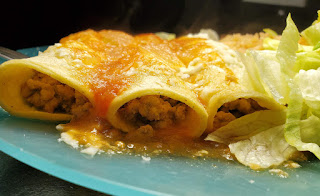 Did you notice two days ago there was a missing post?  That would be because two days ago a huge pot of Mexican taco meat was made using ground pork and yours truly forgot to take a picture of the resulting meal.  Pork burritos.  Made almost the same as beef burritos but with some variations to accent the pork flavorings.  White flour tortilla instead of spinach, no beans, Spanish rice, Pepper Jack Cheese instead of Colby Jack, lettuce, and salsa.  They were not half bad.  Not as good as ground beef but would work again as a substitute for beef again.  Especially since pork is way, way cheaper than beef.

Tonight with still loads of pork taco meat in the fridge, I decided to get crazy and go way out of the normal by making Pork Ranchero Enchiladas. Made in the microwave, the whole meal came together in less than 10 minutes.

Scaled for Likability: Good
Again, it was the pork.  Ranchero enchiladas would have been better with beef or even shredded chicken.  There is something about the pork that is just not quite right.

The ranchero sauce on the other hand was a wonderful alternative to red sauce (with or without meat) or green sauce.  Pureed was definitely the way to go as it thickened up the sauce allowing the sauce to cover the enchiladas instead of running off.  I could see ranchero sauce becoming a staple sauce for enchiladas if it weren't for the time to it takes to prepare.

On a side note, remember how yesterday I told you this table was not a typical breakfast kind of table?  Well, this was served for breakfast today.