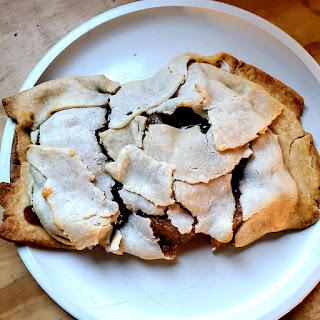 Times are hard right now and the stores are still limited on good stuff.  Not wanting to waste the left over apple pie filling and pre-made pie crust from two weeks ago, an extra large hand apple pie was made.  Well, tried to be made as the crust fell apart when unrolling it and made for a mess of a pie.

Instructions:
Fill one half of pre-made pie crust with one half can of apple pie filling.  Sprinkle filling with extra cinnamon and sugar.  Fold over second half of pie crust and press edges to seal.  Wash with egg wash for rich color and sprinkle with sugar.  Bake at 350 until pie crust done.

Scaled for Likability: Great
It would have been perfect if it had not been broken.  Good thing this table doesn't concern itself with imperfect cookies, cakes, and pies.  The crust was tender and sweet, the apple retained its canned crunch, and the extra cinnamon and sugar made it a not complete can taste filling.  The only thing that could have improved on the final result would have been a huge scoop of melting vanilla ice cream.