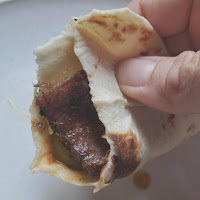 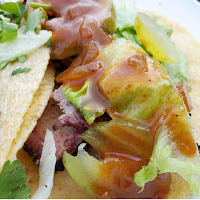 Many, many jobs ago the table counterpart had a job where traveling once again from the main work location to the sister city some three hours away was required.  On this long lonely trip was a taco vendor on the side of the highway who served briskets tacos with onions, pickles, and BBQ sauce in a flour tortilla.  Nothing fancy really, just not commonly seen.  Especially on the side of a highway literally in the middle of nowhere.  Every week, the table counterpart would stop for brisket tacos.  Every week for two years.
Twenty years later we are still loving brisket tacos and have been known to BBQ a brisket for the sole purpose of tacos.  Anytime a new person comes to learn about brisket tacos it is the same reaction: What! brisket is for BBQ with beans etc.... and then once they a coerced into trying just one brisket taco (with or without the onions) it is always snarf, snarf, snarf can I have another?
Ingredients:
Thinly sliced brisket
Thinly sliced hamburger pickles chips or sandwich slices
Your favorite BBQ sauce
Warmed on skillet flour tortillas
Optional Toppings:
Lettuce
Cilantro
Onions
Modifications Made:
When I am feeling fancy, I will warm the brisket slices in a skillet to create a nice crunchy outside layer.
Scaled for Likeness: Great
Brisket served BBQ style is good.  Honestly.  However, if given a choice, this table would choose brisket tacos any day of the week over BBQ brisket with the works.  Just meat, bread, pickles, and sauce (preferably homemade).  Don't knock it till you try it...