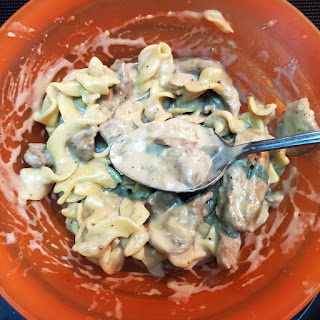 Spring Break!  Most people think of trips to the lake or the beach or to some amusement park for fun filled week celebrating the coming of warmer days and just a few weeks of the school year left.  This table and its counterparts spent it with family.  Yeah a full size kitchen with five mouths to feed three meals a day for three days.  Can't wait.  Yesterday it was Italian, tonight in honor school cafeteria foods, Classic Beef Stroganoff.  Tomorrow a soup.

Modifications Made:
Two onions seemed like way too many onions so one large onion was used instead.  Beef broth was made from a Knorr cube and additional salt was reduced to offset the salty broth cube.  Worcestershire sauce was doubled.  Sour cream was reduced to 8 ounces.  To offset the sour cream, 1/4 cup of extra flour was added along with one cup of milk.  An entire bag of wide egg noodles were cooked instead of three cups.

Instructions have the entire meal cooked in less than 30 minutes.  Knowing full well meat cooked this quick would be tough, two cups of extra water were added to mixture and allowed to cook on low for close to an hour.  Every ten minutes or so, the mixture was stirred, checked for salt and pepper and sauce thickness.

Scaled for Likability: Great
Not to my recollection have I ever made real from scratch homemade Beef Stroganoff.  Why?  I always assumed it was too much work.  Expect for the time it takes to cook, the meal was fairly simple to cook. Reducing the sour cream was not noticed and if made again would be stay reduced as the full cup and half would be too much.

Next time, the additional flour would be browned for more flavor instead of just added as a flour/broth mixture.  Also, a key step to a better meat strip would be thinner cuts and cut into bite size pieces.