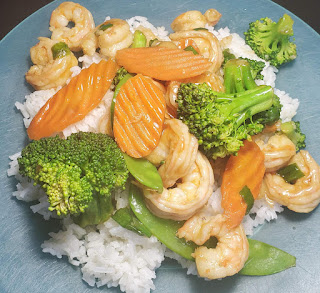 Feeling guilty about the sufferings of the table counterparts at dinner last night, tonight Shrimp Stir Fry was made, kinda like a modern olive branch.

Modifications Made:
This recipe was different from all other stir fry recipes.  Sauce was made ahead of time, veggies were cooked then steamed, and shrimp was cooked after veggies.  Concerned the dish would be extra fishy from not cleaning the skillet after the shrimp was cooked, many cooking modifications were made.  With an exception to the rice, stir fry is a one pot meal.

Shrimp, three quarters of a pound with no salt or pepper seasoning, were cooked then set aside.  Skillet was cleaned and prepped for veggies.  Veggies, five cups with no salt or pepper added, were stir fried separately and set aside when done on the same plate as the shrimp.  With all veggies cooked, the sauce was made, allowed to slightly thicken, shrimp/veggies were added back to the same skillet, and tossed until well coated and sauce completely thick.

Scaled for Likability: Great
If last night's meal was about me, myself, and I, then tonight's meal was not.  Shrimp are okay but I like them either boiled and served cold or fried popcorn style.  Everything else I could live without.  Snow peas are chewy, slimy pod with stringy sides that the teen counterpart loves.  My dinner consisted of broccoli, carrots and rice and was good.  Sauce was tasty but needed to be doubled.  The rest of the table counterparts raved, so yes, dinner was a huge success.