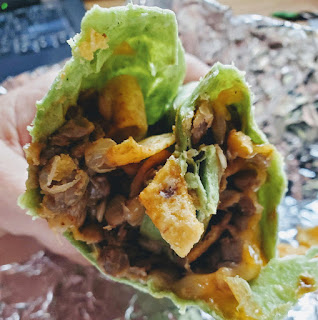 In a post from the beginning of March, I stated Frito Pie was good with a variety of meats including lentils.  Lentil Frito pie got me thinking about all the other ways taco lentil meat could be substituted. Nachos, chalupas (both as a replacement for beans and meat) and of course, burritos.  Or maybe even a combo with Lentil Frito Burrito. With meat still on the hit and miss list at the grocery store, lentils might be the new norm.

Scaled for Likability: Good
These are not as good as lentil tacos but they absolutely would be eaten again.  Using lentil instead of taco meat was not a one to one replacement.  Normally a burrito has one large serving spoon of taco meat.  Lentils in burrito required closer to two large serving spoons.  Placing a thin layer of cheese at the base was a smart move as it melted into the lentils.  Placing another thin layer between the lentils and the Fritos then melted the three ingredients into one.  Once wrapped, the burrito was complete.  To make this again, the spinach tortilla would be replaced with a standard white flour tortilla offering a nice chew to the crunch of the chips.