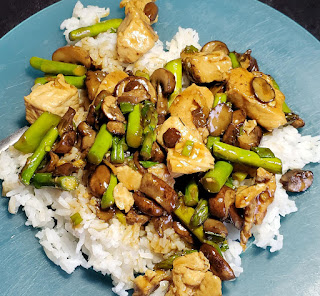 Two weeks since the last non brand new recipe was made.  Some recipes have been slight modifications to recipes served in the past so they don't count as brand new meals but they do classify as a non repeated meal.  For example, last night's flautas, only a different form of taquitos.  The last true non new recipe was chalupas as they have been made numerous times over the years.  They would be made more if I did not have that detest for frying foods.  Two weeks has to be some type of records.  Gonna have to look into this.  Until then, lets add another brand new recipe, Ginger Chicken Asparagus Stir Fry

Modifications Made:
Ingredients: Chicken was seasoned with salt or black pepper but cooked plain. White onions were replaced with half batch of thinly sliced green onions.  Green onion were not cooked but tossed into the chicken, mushroom, asparagus mixture directly before the seasoning were added.

Scaled for Likability: Great
Asparagus is a hit and miss vegetable.  Cooked correctly, the stems are crisp and tender.  Cooked incorrectly the stems and especially the tips turn to mush, baby food.  It seems as though stir fry was invented for asparagus, yet I have never it before in a stir fry.  Such a change of pace.  Not better than broccoli, just different.

The table counterparts were not as impressed with this meal as I was as neither of them are mushroom or asparagus fans. Nope, this recipe was totally made for me and me alone.  The sauce was abundant with a perfect mixture of salt to sugar. It will be added to the T&T list, even if it just for me.

Stir Fry Keys to Success
On a side note about cooking stir fry, there are several keys to follow to a making a successful stir fry.  One is to have all ingredients ready before the skillet is even hot.  The second is to use a skillet capable of hot, hot temperatures.   Finally, make all the ingredients in batches seperately and then add together back in the hot, hot, hot directly before adding the sauce. This is stir fry, not steamed veggies.  If the sauce is added back to a skillet that is not hot enough, the sauce cooks the veggies as the water is slowly evaporated.  Added back to a skillet that is correctly heated, the liquid immediately evaporates leaving a thick, silky sauce.