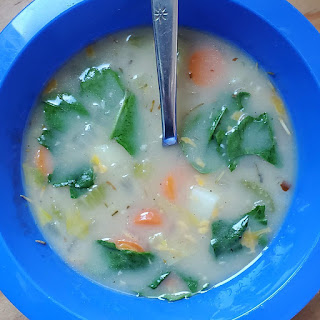 Taking advantage of cool temperatures, another soup was requested.  Soups work well for new recipes as there are very few T&T soup recipes and every table counterpart loves a good soup.  Especially if served with bread.  And what soups are best served with crunchy breads, vegetable or potato soups.  Easy Creamy Homemade Potato Soup was the perfect mix of potato base with loads of veggies.  If extra helpings of crunchy bread were consumed the veggies would offset the bread, right?
Modifications Made:
To the list of veggies, one handful of chard leaves were added to the mix as a boost of green.  Besides, greens and potatoes go well together.
Not having cream, half and half, or sour cream, one cup of low fat milk was added instead of the quarter cup of the other options.  More milk was added since all the original options were all heavy milk base and low fat milk is really just watered down milk anyways.
Scaled for Likability: Good
It wasn't potato soup and it wasn't veggie soup it was a mix somewhere in between. It was thin stock based like veggie soup but heavy on the potato flavor.  Next time, I would serve it thicker like potato soup with veggies added in as toppings.  To serve it thicker I would not add extra potatoes instead would add instant mashed potatoes cooked in milk.  Also, the swiss chard leaves would be left out and replaced with just swiss chard stems instead for their crunch.