What a Breakfast Sandwich 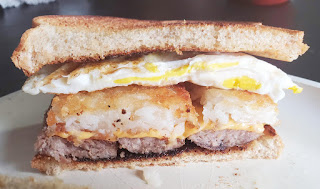 Modifications Made:
The original fast food breakfast sandwich is a hamburger patty, cheese, hash brown sticks, egg, bacon, and a creamy sauce piled high on a hamburger bun.  The homemade version was toast, left over homemade sausage links fried in the skillet, one and half hash brown patties, one egg, and extra buttery toast.

Scaled for Likability: Great
Bacon.  The homemade version did not have bacon but had plenty of bacon flavor as everything was fried in bacon grease.  Creamy sauce was missed as it is peppery in flavor and adds a bit of tang to the sandwich.  Not knowing what is in the special creamy sauce nor wanting to experiment, toast was heavily buttered on both sides.  What really was missed was the hamburger bun itself.  Plain white bread just did not hold up to the heavy contents of the sandwich.  All in all, still a hit and will be added to the T&T list of meals for either breakfast or dinner.