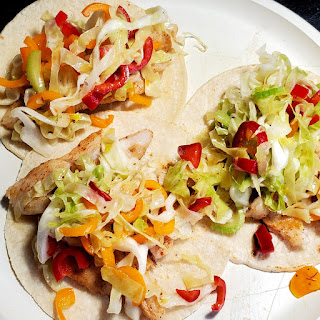 Friends, they make life.  A friend stop by today with two fillets of fresh caught fish.  Not enough to eat on its own as fried or pan seared but enough when paired with slaw in a taco.  Fish tacos are a T&T recipe but not the slaw.  Normal fish tacos are seasoned with Tony Charchere's and topped with cilantro, salsa, pico de gallo, lime juice, sour cream, avocado, etc... Never a Marinated Cabbage and Sweet Pepper Slaw.
Modifications Made:
None.
Scaled for Likability: Great
Making enough slaw to feed an army of fish tacos, it was a sad moment to realize there was more slaw than there was tacos.  Drats.  Luckily enough, the slaw was fabulous all on its own and there was none to be spared for left overs the next day.  I could see this slaw mixed with albacore tuna or chickpeas or lentils.  In preparation for the next time fish tacos are had, the slaw will be made the day before allowing the veggies to loose some of their crunch and flavors to meld together more.  Three hours was just not enough time and if veggies were cut thinner to offset the lack of time the would lose their ridgeness and texture.  Soft fish, crunchy slaw, extra lime juice.  Fabulous.