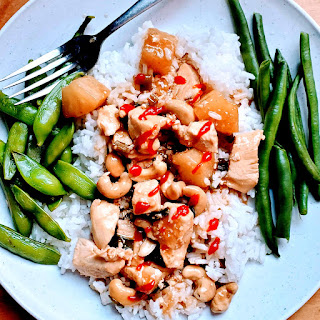 Where has the time gone?  It has been almost three weeks since an Asian recipe was cooked.  The last two were hit and miss.  The table counterparts did not like the Chicken Mushroom Asparagus Stir Fry and I not the Shrimp Stir Fry.  Sticky Pineapple Chicken seemed like the perfect way to get back on track with a winning stir fry.

To lessen the sugar, the juice stayed the same but the hoisin and brown sugar were reduced by half and soy was regular strength sodium.

Three ribs of sliced green onions were added directly before the sauce.

Scaled for Likability: Great
This table (teen counterpart excluded) is not a fan of sweet Asian meals.  No to Sweet and Sour Beef/Chicken/Pork/Shrimp.  No to Lemon/Orange/Sesame Chicken.  Just no.  Understandably, most Asian stir fry sauces are almost equal parts sugar to soy.  Something about the sugar to salt ratio balances each other out and then there is the heat element from the chili sauce or Sriracha.  This recipe called for half cup pineapple juice, third cup of hoisin sauce, and half cup of brown sugar to a measly third cup of reduced salt soy.  Not to mention the pineapple in the dish itself!  Having reduced the hoisin and brown sugar, the sauce was not to sweet to eat over rice and it was just sweet enough to be eaten with a splashing of Sriracha.  Next time, I would reduce the brown sugar to only an eight of a cup and the hoisin sauce would increase to say four tablespoons or so instead of a heaping two.

This recipe was fabulous when paired with a vibrant, bright green veggie.  It would have been fabulous as leftovers since it was pan fried and not deep fried.  But alas, there was none.  I could have lived without the pineapples but the table counterparts said it rounded out the whole meal.