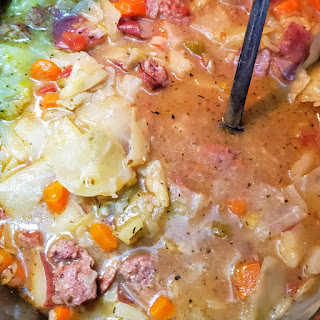 The last night of Spring Break.  So sad.  All these meals and not one picture of all the new desserts made!  Normally when I come to visit family I make a new dessert for every night there and one extra to have during the day.  Can't believe it as the desserts were all new cookies, too.  There was sprinkle shortbread, soft chocolate chip, and dark chocolate walnut (cocoa not chips).  It is a good thing pictures of the new meals, like Cabbage Sausage Potato Soup, were taken otherwise my time would have been wasted.  Not!  There were three batches of cookies and repeat carrot cake.

Modifications Made:
Sausage was the leftover five links from the pasta.  Today, however, the sausage was thee links of regular and two hot working .  Five link of sausage according to the package weight 19 ounces, not one pound.

Not seeming like an Italian dish but more German, seasonings were modified to 1 teaspoon fennel and 1 teaspoon of caraway along with salt and pepper.

Scaled for Likability: Good
Too many leeks.  Leeks are mild in flavor and should have when cooked faded into the background of flavors.  Not be front and center.  Leek quantities were not adjusted so I am thinking the excess leek flavorings came from these leeks being very large in stature.  Next time, leeks would be adjusted to one maybe one and half.

Not enough stock.  Six cups sounds like a tremendous amount until all of the ingredients are mixed together.  Another two to three cups of broth were needed to make this into a soup.  If, however, this recipe was served in a bread bowl, it would have been good thick.

Next time, the recipe will have a few modifications.  Less sausage, maybe two or three links, double the carrots and celery, smaller cabbage and potato pieces, and served with bread.  Cause every good soup needs a bread even when the soup is a stoup.