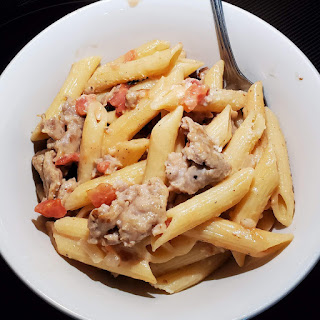 A thousand years ago I feel in love with a Rachael Ray 30 Minute Meal involving farfalle pasta, Italian sausage, mushrooms, diced tomatoes, heavy cream, parm cheese, onion, garlic, salt, and pepper.  Never having ever succeeded in making the recipe in 30 minutes but closer to an hour, the additional time requirements do not dissuade my cooking of this tasty meal because it was easy even if time consuming.  It was everything one wanted in a pasta recipe.  Pasta, petite diced tomatoes, mushrooms, and lots sausage crumbles all coated in a creamy and very cheesy sauce.  Leftovers saved perfectly and made enough to feed an army.  If I had lived alone upon discovering this recipe, I probably would have made it every other week.  As it was, I tried to make it every six to eight weeks much to grumblings of the table counterparts.

The other night Spicy Italian Sausage Pasta Creamy Tomato Sauce came into my life.  Close to my much loved Rachael Ray Pasta (which is how I refer to it as the original name has been lost to time) I decided to give it ago.

Modifications Made:
The one thing that almost kept me from making this recipe was the most random of random measurements on the ingredients.  Pasta: 8 oz, sausage: 10.6 ounces, 1/2 tablespoon of flour.  What kinda of crazy nonsense was this recipe.  Luckily the pictures were oh so inviting.  My favorite is the close up so close the pepper on the pasta could be seen.  Beautiful.

Pasta comes in 16 oz boxes.  Cooking half boxes does not work well unless one actually measures out on a scale 8 ounces.  Half a box does not feed this table and its counterparts, especially if one wants leftovers and everybody wants leftover spaghetti dishes! Even there are not enough ingredients to warrant the entire box of pasta, the uses for leftover pasta are endless.

So yes, the entire box was cooked in heavily salted water to al dente.

Italian sausage comes in two forms: links and ground.  Links come in various brands of "brats" are these parts and are about 20 oz for five links.  Ground is sold like any other ground meat, in one pound quantities.  How in the world does one arrive at 10.6 ounces of sausage??

Every time a dish calls for Italian sausage, the amount requested is divided between half regular or sweet and half spicy for a more full flavor. Since sausage links comes in packages of five, it means one dish will be slightly hotter than the other.  The sausage tonight was two links of regular and three links of hot.  Sausage links were stripped of their casings, the meat was browned, and fat drained.

With sausage draining one finely chopped small yellow onion was added to the dredges at the bottom of the pot.  Cooked until translucent and soft as crunchy onions are not desirable.  To the onions; once cooked; the garlic and two tablespoons of flour was added and allowed to brown a bit for a richer depth of flavorings.

Upon browning of the flour, the broth doubled in quantities was added, brown bits were whisked off the bottom.  Milk replaced the cream and whisked to create thick slurry.  Canned tomatoes with juices and sausage were added and allowed to simmer.  Simmering reduced the stock, softened the tomatoes, and combined the flavors of the sauce and sausage into one.  Salt and pepper were adjusted.

After 15 minutes or so, pasta was added and all contents gently stirred.  Parmesan cheese topped the dish.

Scaled for Likability: Great
Was it my Rachael Ray Pasta, no as there were no mushrooms but the flavorings were so close.  So, so close.  The sauce was creamy, the pasta and tomatoes tender, and the sausage just spicy enough to offset the creamy.  Easier to cook than my beloved RR Pasta, it might just replace the original since mushrooms can easily be added when cooking onions with no additional time needed.

One of the downsides to  RR Pasta is the cheese based sauce.  Good in the pasta, yes.  Easy to clean up, NO.  This dish has no cheese in the cream sauce making this meal easy to clean up securing its place above the RR Pasta.

Next time, the sausage quantities will be adjusted to two links regular and three hot for more heat.  Or maybe even two links sweet and three hot.
Edit June 26, 2020:
Made this recipe again with only five regular Italian link sausages for family.  The recipe was doubled as written thinking there would be leftovers for breakfast the next day.  I just know this recipe will be even better as leftovers but I have yet to succeed in creating enough for leftovers.  Will try again as I still want to try the sweet and hot link mix.