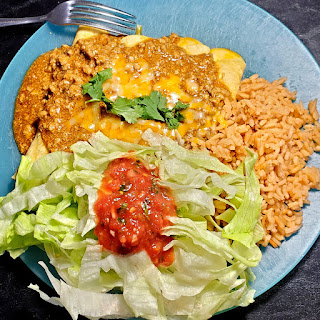 Score!  Went to the store with a wide open menu plan as I never know what is going to be available and low and behold they had ground pork and it was only $0.99 a pound.  A pound of pork has not cost less than $2 since I was in college a hundred years ago.  Less than a dollar I don't think has ever existed in my life.  With limitations on meat purchases to two, I bought two.

Standing in the store wondering what I wanted to cook with pork then became the problem.  Here I am standing with my basket staring at my package of pork.  People must have thought I was off.  Hey, these are trying times.  Chill.  Already had Porky Rice - a budget friendly meat stretching meal, Pork Burritos - not a meat stretching meal nor very good, Pork Potstickers - don't have wonton wrappers, and Pork Burgers - not meat stretching but very yummy.

Glancing over from the meat isle to the cheese isle, dinner plans formed.  Cheese enchiladas with pork meat gravy.  Pork gravy served a couple of purposes, 1) cheese enchiladas, a house favorite, will be served again as a dinner, 2) using meat in the gravy will allow the meat to be used sparingly and if stingy on the gravy could make close to a weeks worth of enchiladas (breakfast here we come) and 3) a new recipe will be created.  Hopefully the pork gravy will fare better than the Pork Fideo.

Instructions:
Enchiladas with Pork Sauce was a combination of Cheese Enchiladas for the filling along with Beef Enchiladas for the taco meat.  Instead of the taco meat being used as the filling for the enchiladas, the meat is added to the gravy in a two to one ratio.  For example, the red gravy makes about three cups of gravy so it is mixed with about one and half cups of meat.  The rest of the meat is saved for additional meal usage later or additional gravy mix as the gravy freezes and reheats fabulously.