Shepherd Pie, If You Squint 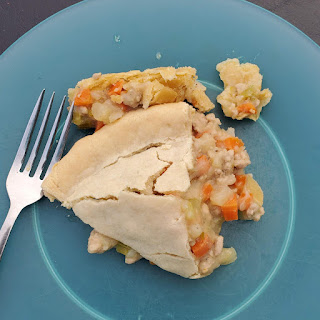 In my head, Shepherd's Pie is an easy meal to make.  Meat, carrots, potatoes, onion, celery, cream of soup, two pie crusts.  Yet, every time it is made, the end result is anything but.  Having made a successful chicken pot pie during the holidays, I was renewed in my efforts to make a tasty Shepherd's Pie.

Instructions:
All veggies were diced to small bite size piece, seasoned slightly with salt and pepper, cooked separately to al dente, and placed in large bowl.  Ground pork was browned with salt and pepper and drained of fat, and placed atop of veggies.  To brown bits of pot, 1/8 cup of flour was added, browned, and whisked with chicken broth.  Flour broth cooked for five minutes to allow bit on bottom to release then added to pork and veggies.  Mixture gently stirred to incorporate flour broth and placed inside prepared pie pan.  Covered with crust and baked until bubbly and golden crust.

Scaled for Likability: Good
And I repeat, every time it is made, the end results are anything but Shepherd's Pie.  To my credit this is the closest I have ever gotten.  The error lies with ground pork not beef, meat to veggie ratio was short on meat, and the flour broth needed more broth flavorings.  However, it was edible and if served exactly as it was made again, it would happily be eaten.