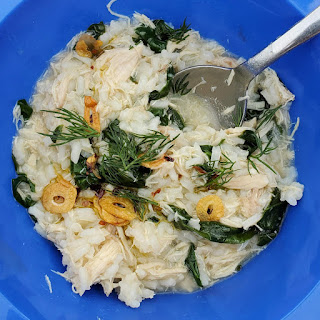 There is something in my brain that turns almost every soup into stoup.  I just can't seem to make enough broth.  This issue was never more prevalent than in my attempts to make Chicken and Rice Soup with Garlicky Chile Oil.

Modifications Made:
In the same pot the garlic oil was made, one whole small chicken with diced onion, salt, pepper, and a couple of smashed garlic cloves was boiled and deboned.  To the same broth with garlic clove removed, shredded chicken was returned along with one heavy cup of white rice, salt and pepper to taste.  Rice was boiled until almost done.  Finely sliced chard was added in the last five minutes of rice cooking.

Scaled for Likability: Great
As it turns out, one can truly cook on autopilot.  My brain saw chicken and rice and therefore made my T&T recipe of chicken and rice, not chicken and rice soup.  The addition of the chard and the garlic oil chips was a nice flavor enhancement to the T&T chicken and rice.  What was best liked was the fresh squeeze of lemon across the top of the dish. Lemon, dill, garlic, red pepper, chard, chicken, rice.  It was great.