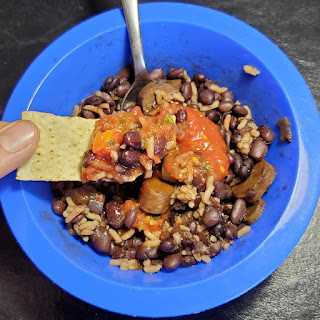 Soups are the staple to any low budget meal.  Currently, soups are the staples to any pandemic meals.  With a wide variety of legumes and rice on had, a Black Bean Soup with a side of Spanish Rice was attempted.

Scaled for Likeness: Good
Way back in college, in my last semester of Senior year I had a class taught by the Dean of my field  who was known for her very challenging yet stimulating class.  On the day before the final, a pop quiz was given.  The quiz will forever stand out in my memory.  It went something along the lines of this:

And while I think of that lesson often, I still make the same mistake often.  Just like in this recipe.  It very clearly states "six cups of cooked black beans".  Had I followed the instructions and made the beans first and then cooked accordingly with the new ingredients, the recipe would have been great.  Instead, all the ingredients were cooked at the same time the dried black beans were cooked resulting in a soggy carrots and completely cooked down petitie diced tomatoes.  My final result was a thick mess only saved by the addition of rice, salsa, and chips.  Soup this was not, even if it was tasty.