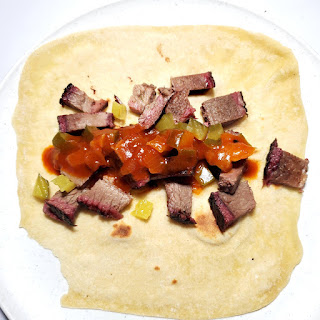 Argh, there's no tortillas! I don't think these words have ever been uttered before at this table. There is at least always one bag in the pantry but normally there are two or three. With five varieties eaten on a regular schedule it seems so odd there were no tortillas. Don't even know how that happened.
Needing tortillas for dinner, I quickly searched for another new tortilla recipe to try. Something equally as amazing as the instant potato flour recipe was found. This time, the secret ingredient was bacon. Bacon Fat Tortillas, who knew.
Modifications Made:
Bacon fat is stored at the back of the fridge in a tin can.  This is the way bacon fat is always readily available.  Waste not, want not. With cold fat on hand, fresh bacon was fried.  Bummer.  Everybody loves bacon.
Instructions were followed using a stand mixer instead of kneading by hands.  Hand kneading.  Ha!
Scaled for Likability: Great
Couldn't even taste the bacon fat in the tortilla.  If one was lucky, bits of bacon were seen in the tortilla but not tasted.  Lack of bacon flavor did matter anyways as the BBQ and sauce would have overpowered the any flavor anyways.
Next time, I would like to add bacon fat to the instant potato tortilla recipe and increase salt by half of teaspoon.