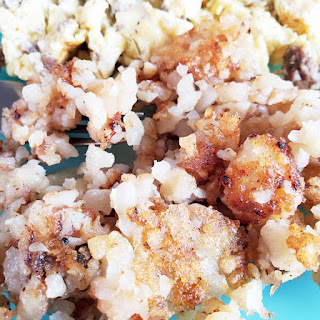 If a bag of frozen french fries or hash browns been opened and not completely used, once refrozen the inside contents develops a layer of ice rendering them useless. Water and oil don't mix so french fries are trashed. Water on hash browns causes them to become soggy when baked.
With yet again another bag of ice covered tater tots discovered in the freezer, a new theory was tested. Skillet Hash.
Instructions:
In a hot skillet, add tots to quickly sear. Season with a dash of onion powder, salt, and pepper. Turn often to keep from sticking. Tots will fall apart as they cook allowing for larger surface area to crisp. As area gets larger, turn tots in larger sections essentially creating spatula sized hash browns.
Scaled for Likability: Good
Were these as good as fresh fried hash browns, no. Were these soggy tater tots, no.  Were these enjoyed with eggs, yes.  With that I consider this test a success.  There was even room for a few modifications.  Heavily sauteed onions in bacon grease before adding tots would be a great addition. Fried bits of bacon and sauteed onions would be even better!