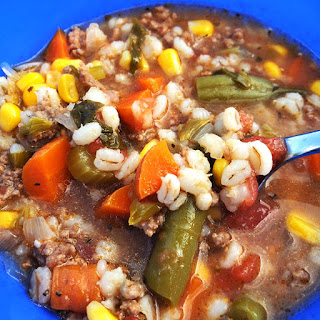 Cooking barley for Sun Harvest Lentil Soup last weekend, I stood reading the recipe for Hearty Barley Vegetable Soup on the back of the barley box and immediately decided it would be made the very next cool snap.  Who knew it would only be a week later when the cool snap came. Two cool snaps before October, crazy man.  Just crazy.

Edit: September 29, 2020
As with all soups, this was even better the next day.  However, I am glad I left the barley slightly under cooked as the barley soaked up liquid over night as water was added to liquify soup before heating.