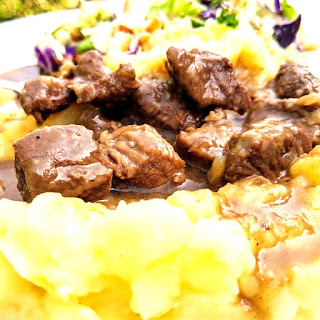 My local grocer has very strict guidelines to fresh produce and meat.  If the product is within three days to the sale by date, the product is clearanced at 50% produce, 25% meat.  Entire weeks meals have been rearranged on the fly because of clearance sales.  Other times, product is frozen for later usage.  Rummaging around in the deep freezer last week, I stumbled upon a 2.5 lb beef shoulder that had been purchased back in July.  Not wanting it to go bad and not wanting one the standard go to meals for beef shoulder (beef stir fry, shredded beef in a variety of flavors) I settled upon Beef Tips and Gravy.  Tips are not quite roast or stew and not quite shredded beef either.  And with the exception of one ingredient all were pantry staples.

Modifications Made:
Onions were not cooked until soft.  Once meats cubes were browned, finely diced onions, beef broth, french onion soup, pepper, and bay leaf were added all at once.  Beef tips seemed more along the lines of a crockpot recipe and if generations of roasts have been made without soft onions, then one pot of beef tips could be, too.

To thicken gravy, the recipe stated to add 3 tablespoons of cornstarch to 1/3 cup of water directly before serving.  Cornstarch is an perfect flavorless thickener.  With extra liquid and salt from the canned soup, soup can of water, and the beef broth, flour was used instead.  Two cups of broth were removed and allowed to cool before 1/3 cup of flour was whisked in it to create a very thick gravy.  Once well mixed into a runny paste, the gravy was whisked into the broth and allowed to cook for another few minutes to remove any chance of raw flour flavor.

Scaled for Likeness:  Good
Not bad.  They were not as good as I have had at home style restaurants, but the meat was tender, the gravy was not salty (thankfully) and there was plenty for lunch tomorrow.  There was definite room for improvement.  For starters, the meat will not be salted when browning as there is plenty of salt in the soup and broth.  Secondly, the meat will be heavily dredged in flour before browning.  This will ensure all possibilities of raw flour taste and will develop a richer tasting gravy from the bits at the bottom of the pan after meat is browned.  Thirdly, low sodium canned beef broth will be used instead of a beef stock cube as they are notoriously higher in salt than good quality broth. Last but not least of which it has nothing to do with the preparation of the meal itself but in the serving, rolls.  Gravy containing bits of meat overflows the taters and requires a roll or two to sop up the good stuff.  When this meal is finished, one's plate should be void of all remnants of dinner.  It should look as if the plate was not used.

One final note, this meal was made with beef but I have no doubt it could have been made with venison.  Venison shoulders are not easy to clean and result in chunks of meat.  I know people who don't even bother with the shoulder and they toss it to their dogs, the varmints, or the garbage.  Not being brought up with this waste mentality, shoulder meat was always used for meals just like this.  Where uniformed chunks of meat is not required.  Where if bits broke down before others were done cooking, all the better.  If using venison, meat chunks would have been browned in a couple tablespoons of vegetable oil so as to not stick.  Once browned, the meat would have been tossed with flour to create a thick coating for the gravy.  And yes, rolls would have been needed with venison, too. Lots of good buttery rolls.