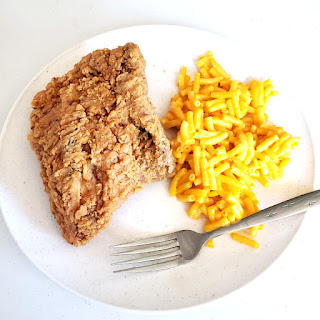 Went to the grocery store for dinner inspiration and was assaulted by the smell of fresh fried homestyle chicken.  Fried chicken!  Everybody loves fried chicken but nobody wants to put forth the effort to make fried chicken.  With only one fried chicken fast food joint in town, guess our local grocer was gonna give it a go.  They already sell rotisserie chickens in half dozen flavors so why not fried chicken, too.  At $8 for two pounds of fried chicken I was game.  With a quick run for box mac and cheese, dinner would be ready in less than 30 minutes meaning the fried chicken would still be warm.

Scaled for Likability: Fail
Holy crap.  Did you know there is an art to cooking box mac and cheese?  It is called DO NOT ADD SALT.  As in NONE!

I did not know this because I don't eat box mac and cheese.  Occasionally I will eat a small spoonful of Velveeta Mac and Cheese, but not instant cheese powder mac and cheese.  When either variety is made the table counterpart cooks them claiming I always make them too sticky, too runny, or too gritty.  Fine by me.