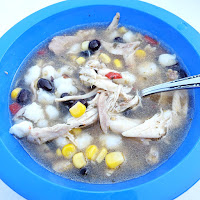 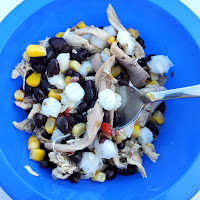 As it turns out, fall has stayed long enough another warm meal can served and Slow Cooker Salsa Verde Chicken Soup was the winning recipe.

Chicken was cooked on low until meat falling off bone.  With chicken removed, corn, hominy, and one can of well rinsed and drained black beans were added.  Chicken was shredded, returned to pot, and allowed to rest for 15 minutes.

Scaled for Likability: Good
Soup flavor was full without being a heavy cream or tomato based soup, spicy without leaving burning lips, smoky from the comino, and full of tasty veggies and tender chicken.  What the soup was not was soup.  Once the table counterparts were served with as much stock as could be ladled out, my bowl was simply soupless.  Don't get me wrong, the soupless soup was great but soup stock is my favorite part of any soup.

My stock was clear in color where as the original post was the color of dark roux.  I am at a loss as to where the color came from in the soup.  Next time this is soup is made, stock and seasonings will be doubled and a one tablespoon of chili powder will be added for both seasoning and color.