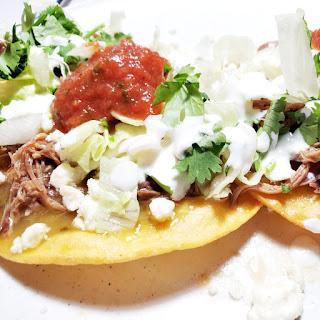 Looking for a better explanation about the differences between chalupas and tostadas I stumbled across this recipe for Authentic Mexican Chalupas. Two things stood out on this recipe making it different from any other chalupa or tostada ever seen or eaten. First it had homemade Spicy Salsa Verde as the base and it secondly the salsa was fried with the chalupa in the oil. Say what!
According to the blog, authentic chalupas from the heart of Mexico are cooked this way and I wanted to give it a go.  What's the worst that could happen? Regular Tex-Mex chalupas. No loss there.
Modifications Made:
Homemade salsa verde has been made in the past several times.  Most call for some version of charring or roasting the veggies for hours on end before even simmering for hours on end.  This recipe had none of that and it was great.  With exception to the addition of a whole jalapeno, the recipe was followed as written.  Once pureed, the salsa was returned to the stove and allowed to simmer until chalupas were ready.
Scaled for Likability:  Great
Another great use for the savory Pineapple Pulled Pork.  Chalupas were crispy on the outside, slightly chewy on the inside where the salas verde simmered in the oil.  Sweet pineapple, spicy salsa verde, salty cheese, zesty creme sauce, and homemade salsa.  It was perfect.