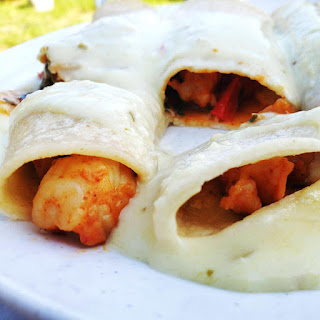 Everybody loves a good deal at the grocery store.  Buy one, get one.  Reduced for quick sales (my personal favorite for produce and meats),  Seasonal sales on expensive items like shrimp for example.  Went to the grocery store where locally caught wild Gulf shrimp were on sale for $5/lb.  Instantly dinner plans were rearranged for a long saved recipe in the filing box: spicy shrimp enchiladas. To satisfy this table's palate, Creamy Shrimp Enchiladas and Easy Creamy Shrimp Enchiladas were combined for the perfect fancy dinner.

Modifications Made:
Shrimp Modifications:
To a large hot skillet all of the following were added and cooked until shrimp were pink in color.  Separate into eight portions.  Set aside.

In a saucepan melt butter on medium heat. Whisk in flour. Cook for 2-3 minutes, whisking the entire time.  Whisk in chicken broth.  Cook until thickened, whisking occasionally to keep from sticking to bottom of pan.  Whisk in one pile of Pepper Jack cheese until melted. Continue with each pile until all cheese has been fully incorporated.  Turn off heat and whisk in sour cream.  Set aside.

Enchiladas Modifications:
Warm eight corn tortillas in a damp cloth in the microwave for ten seconds.  Flip cloth and warm for additional five seconds.  On large microwavable plate, remove one tortilla fill with shrimp stuffing.  Roll leaving seam side down.  Repeat for all remaining tortillas.  Spoon cream sauce over enchiladas.  Warm enchiladas for 20 seconds or until warm.

Scaled for Likability: Good
Spicy shrimp enchiladas these were not as the jalapeno lack any heat.  There was more heat from the cheese than from the jalapeno itself.  Shrimp were tender and perfect in size when cutting into enchiladas.  Larger shrimp would have been difficult to manage for smaller mouths. However, the shrimp lacked flavor.  The flavor was outside the shrimp not down deep. Cheese sauce was creamy without any grainy texture and thick enough to not run off enchiladas when dished out per plate.

Next time, shrimp and shrimp seasonings will be allowed to marinade for a minimum of 30 minutes for deeper penetration of flavor.  To the marinade two tablespoons of olive oil will be added to keep the shrimp from sticking to the pan.  Whole black beans will be served alongside shrimp enchiladas and rice for a nice blend of textures and proteins.