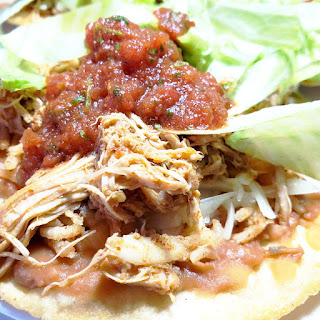 Homemade chalupas shells are better than any store bought version. Hands down, no room for arguments. What goes on top of the chalupas is another matter. Myself, I prefer the classic refried bean and yellow cheese with lettuce and salsa. If I'm feeling fancy guacamole is added. Table counterparts prefer beef taco meat.
Tonights version used the same shredded chicken for green chicken enchiladas but topped with a white cheese.
Modifications Made:
When beef chalupas are made the meat is added after the beans and before the cheese so the cheese causes everything to stick together.  On the chicken chalupas, the meat was added on top of the beans and cheese and before the lettuce.  Shredded chicken holds together well so it doesn't need to be anchored to the shell itself.
Scaled for Likability: Good
Chicken meat was fully flavorful by itself and held its own with refried beans and white cheese. It would have been better if the beans were black instead of pinto and if the cheese had been pepper jack instead of Monterey jack.
Having to be different, the teen added rice to his chalupas and they looked very good. Maybe next time, a deluxe chicken chalupa version containing all ingredient and toppings. I can just see the mess already. Maybe a deluxe chicken taco salad would be a better idea.