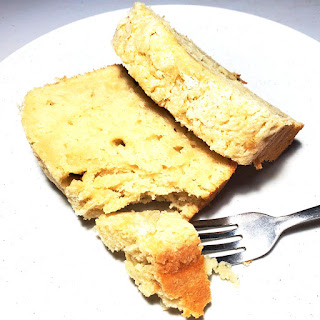 The problem with making one or two simple desserts when visiting family is that when you come home simple desserts are now wanted after dinner.  And since none of the pound cake or chocolate cake were brought home (because half the cakes were placed in the freezer like instructed) a Simple Sweet Bread was made because the opening line stated it "only take 5 minutes hands on time".

Oh, sure the pictures looked great with its crunchy top layer, moist insides, and golden color.  Ingredients were simple pantry staples and could easily be reduced to just one bread pan.  None of those were the reason for cooking.  It was the five minutes time.

Modifications Made:
As mentioned, the recipe was reduced to one loaf pan.

Scaled for Likability: Good
It was everything the post claimed.  This simple sweet bread was easy to make with the perfect amount of sweet making it worthy of breakfast with eggs on the side or lovely with lemon glaze for dessert.  Great it could not be because great would have been light, fluffy, and airy.  Good because it was crunchy and it was not too sweet and mostly because it was heavy.  Heavy as in pound cake but not a pound cake.  Heavy as it settles in your stomach like a brick.  Good, yes.  Just not bread in texture.