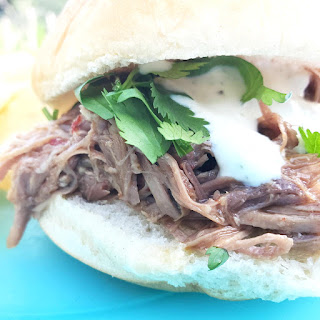 Cooking with game meat can be tricky. Game meat can be dry even when cooked with oil, tough even when cooked all day, and gamey even after soaking all night in salt water.  With two tiny wild pork shoulders in the freezer, I attempted a non traditional cooking method in Pineapple Chili Pulled Pork Sandwiches.
Modifications Made:
To a crockpot all ingredients were added at once with one chipotle in adobo sauce replacing guajillo and habanero omitted.  Once pork was tender, remaining sauce was pureed until smooth and allowed to cook down till thick. Pork meat was cooled, removed from bone, shredded, and added back to sauce.
Black beans and sweet pineapple based pulled pork did not go well together during taste test so black bean base was omitted from burger along with extra pineapple.
Creme was mixed with lime zest, a splash of lime juice, a quarter teaspoon of garlic, and a pinch of chili powder.
Scaled for Likability: Great
Pulled pork always seems to be BBQ based with onions and pickles and very greasy.  Following the instructions might have been necessary for sure bought pork but add there was not fast on this wild pig, browning before cooking was a surefire way to dry out the meat.
With two small legs to simmer, infusing moisture and flavor required the legs to be rotated top to bottom several times during the cooking process. Water level was monitored to ensure the meat stayed moist.
Finally, pulled pork was very flavorful and required a bread more robust than a standard hamburger bun. A brioche bun, a hearty grain bun, even a thick slice of Texas toast. Don't skip on the creme sauce nor the fresh cilantro as they round out the flavors. Thinly shredded lettuce would have been a great addition to the sandwich for some much needed crunch.