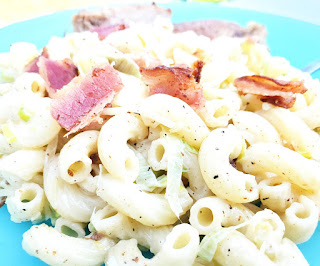 Waste not want not. Last night's dinner only needed half bunch of leeks.  With a half bunch of leeks left, an immediate recipe using leeks had to be located along with leftover pasta. Pasta with Bacon and Leeks was one of the first recipes discovered of which all the ingredients were on hand. Score, no trips to the store.
Modifications Made:
Recipe was reduced by half with exception to the bacon quantities.
Scaled for Likability: Great
Leeks are hit and miss.  Meals have been served with leeks that were extra leeky (like overly fishy fish) and other times there was a complete lack of leek flavor.  Both are equally as frustrating.  Cleaning too many leeks when a smaller amount would have completed the meal.  Cleaning all those leeks for no reason as more was needed anyways.
This was not either of those cases.  This was the perfect ratio of leek to bacon to cream to pasta.  Shredded parmesan cheese would have been better than grated for its texture and melting level.  However, if it is a case of grated or none at all these use the grated.  Parmesan cheese really brought the flavors together with the salty bacon, creamy milk, and bitter undertones of the leek.