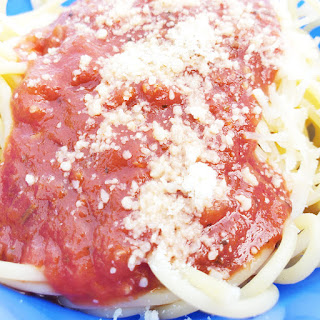 Nothing says an accomplished cook like homemade spaghetti sauce. For something that seems so simple, spaghetti sauce is very complex to create.
Combining Red and Ready Spaghetti and Marinara Sauce seemed so simple. Ingredients are straightforward and simply required more time than effort to create.
Modifications Made:
Combining two sets of instructions allows one to pick and choose between ingredient one likes (sauce) and don't like (canned tomatoes).
14 oz tomato sauce
1 small onion, diced
1 tablespoon garlic
1 tablespoon olive oil
1 - 2 teaspoons salt
2 teaspoons basil
1 teaspoon rosemary
1 teaspoon marjoram
1 teaspoon sugar
1/2 teaspoon red pepper flakes
All ingredient were tossed in a heavy bottom of and allowed to simmer for over two hours, testing for seasoning and adding water as needed.
Scaled for Likability: No, Thank You
Like I said it seems so simple.  It's not. It's not even close to a homemade spaghetti sauce, either.  Lack of tomatoes in the sauce was the least of the problems. Sauce lacked flavor and was grainy in texture. Dinner was consumed but leftovers were tossed to the chickens.  Guess an accomplished cook I am not, yet.