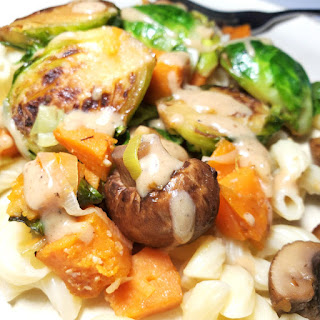 Fall! Still enjoying the second day of cooler temperatures another warm fall meal was planned. Tomorrow is scheduled to be back in the mid 90s but while it is only in the upper 80s I don't worry about tomorrow.  Last night with lower temperatures dinner was soup, tonight a warm Vegan Fall Pasta Salad.
Modifications Made:
Um, non vegan non vegetarian.  Veggies were sauteed in bacon fat, full fat mayo replaced vegan mayo, honey replaced agave syrup, and poppy seeds were omitted (as who can afford or find them anyways).
Scaled for Likeability: Good
Flavors of the mixed veggies were great together.  Dressing offered a nice touch to the veggies but could have been made without.  Noodles were the problem.  They just did not go well with the veggies.  A wild rice mix or even (GAH!) white rice would have been better suited to the dressing and veggie mix.  Lots of room for improvement.