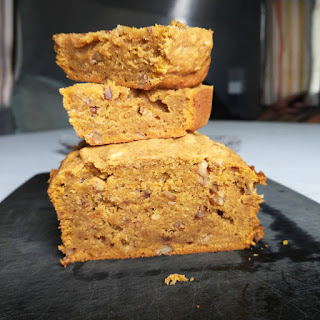 Modifications Made:
Recipe was reduced to half, allspice omitted, dried ginger for fresh ginger, half walnuts and half pecan, two ping pong sized egg instead of one and half regular eggs, cinnamon orange honey for molasses.  Glaze was scratched as the fridge lacked fresh oranges.

Scaled Likability: Great
The bread was light and fluffy, moist without being sticky on top or bottom, contained the perfect ratio of pecans to walnuts.  It needed more cinnamon and less ginger.  Over half the loaf was consumed before someone had a sense of control and put the bread away.

Edit September 28, 2020:
Bread developed a sticky top overnight.  Ginger was even more pronounced when cooled.  Since the bread is not sweet a orange glaze would be a nice complimentary sweet touch.