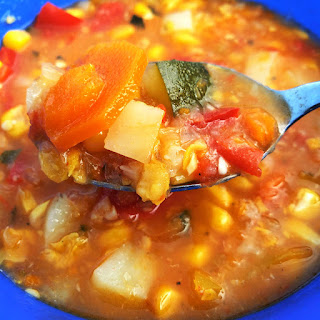 Fall has arrived! Well, at least for two days. With highs in the low 90s for the next two days, warm toasty soups have been planned.  Tonight was a Vegan Roasted Corn and Pepper Soup that was neither vegan nor soup.
Modifications Made:
Corn, onion, carrots, bell peppers were charred in a bacon greased skillet. Once a dark coloring achieved, garlic, a half can of petite diced green peppers and onion tomatoes, zucchini, potatoes, one cube of chicken bouillon, and four cups of water were added.
Scaled for Likeness: No, Thank You
Too much corn, too much black pepper, too grainy in texture. Soup should not have been blended and a tomato sauce base was needed as soup was thin and watery. Not even fluffy white bread could help this meal.  Tonight was simple a slurry of veggies in a pot.