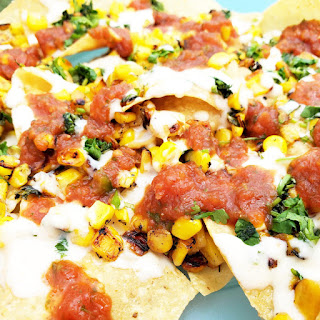 Nachos are almost as good as tacos. They can be as simple as chips and cheese, chips with beans and cheese, or to the elaborate as chips with meat, beans, rice, cheese, lettuce, sour cream, guacamole, and salsa.  Never once have nachos been anything like Mexican Street Corn Nachos.
Modifications Made:
Corn was cooked in a cast iron skillet for the most perfect charred.  Sauce was cooked in a heavy bottom pan without mayo. Directly before serving a space of lime juice was def to the charred corn for a hint of tang to offset the creaminess of the cheese.
Cotija cheese and creme were omitted as they was plenty of cheese in the sauce. Instead of sprinkling cayenne on the nachos, the pepper was added to the sauce itself.
Scaled for Likability: Great
Meal decisions are 99% mine and mine alone. And even though I picked this recipe I was not overly confident it would be tasty.  For starters the sauce contained mayo and as far as I'm concerned mayo is for tuna and potato salad.  More concerning was the cooking is the cheese sauce.  Cooking cheese into milk can result in grainy textures of which I have not figured out how not to do.  Finally, and less important, was the flavor combination. With gazillions of recipes similar in ingredients, I figured it must be at least edible.
Oh was it good. So good! Only having made a half the recipe as this was served for lunch, the three of us were fighting over the last bits. There was some fork stabbing, cup snitching, and finger sweeping of the sauce pot.
Option for chorizo was stared as additional toppings but the flavors of the chorizo would have over powered the simpleness of the dish. I'm glad for opting out on the cotija and mayo and opting to add the lime juice to the corn itself. Sweet corn, zesty lime, perfect flavor. Next time, pepper jack will be substituted for Monterey jack.  Easy, flavorful, and a light meal for hot summer days.