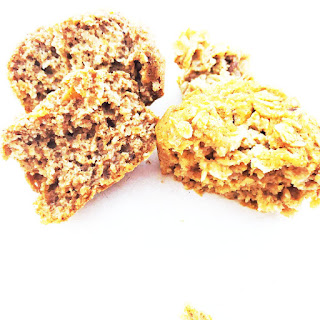 When cooking a butternut squash, one needs to plan for leftovers or two separate meals as finding a small butternut squash is impossible. With close to two cups of roasted butternut squash sitting in a bowl and knowing leftovers were not going to happen, a quick dish was needed to use remaining squash. With honey in the entree and honey in the side dish, why not use honey in the dessert? Healthy Butternut Squash Muffins to the rescue. Quick, easy, and all ingredients are pantry staples.
Modifications Made:
Recipes was halved, pumpkin pie seasoning for chia, soy for almond milk, honey for maple syrup, and vegetable oil for coconut.
Scaled for Likability: Good
Well to the teen table counterpart and myself these were good.  We each ate one straight from the oven as soon as they were physically not going to burn our mouth (the teens favorite), then one later when still warm with butter spread over each half, and then a third at room temperature (my favorite version).  Every time with the same result, great in flavor, bad in texture.  Batter left a grainy texture in the mouth like eating raw oatmeal.
Next time these are made, the oatmeal will be divided into four portions. Portions one, two, and three were pulsed to flour and portions four will be left whole.  In this batch, portions one and two were pulsed to flour consistency, portion three coarse ground (like instant oatmeal, and the fourth was left whole.  To alleviate the grainy texture from the oatmeal, the batter will allowed to rest for ten minutes. Additionally, cranberries and finely chopped walnuts will be a great add in for some much needed crunch.
One tip, let them "over" cook as the toothpick can be deceiving and soggy insides were not yummy.