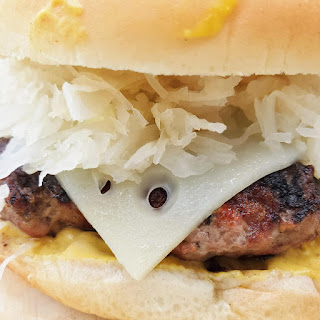 Not Greek Turkey Zucchini Burgers were made last week and while good, they did not have lasting impressions.  Being made with an ethnic flare was the best part of the burger so today another twist was made, German Pork Burgers.  Pork has been used once before in Apple Pork Burgers and the results were great.  Combing pork, swiss, and sauerkraut seems like a win, win burger.
Modifications Made:
Having only one pound of pork available, the recipe reduced by half (sort of).  To one pound of pork half tablespoon of salt/celery seed instead of juniper berry/black pepper was mixed in along with just a heavy tablespoon of sour cream. I feared using an 1/8 of cup of sour cream would make the patty too moist to stay together on the grill.
Scaled for Likability: Good
Not exactly what I had in mind, but they were good.  They can, however, easily be made into a great burger.  To one pound of pork, double the seasoning (meaning use the original quantities as stated in the recipe), add two teaspoons of dry mustard powder, make patties into three large third patties instead of four small quarter pounders, and heavily toast the bun as the patty is very moist and the kraut needs dry, dry buns to keep from making a soggy mess.