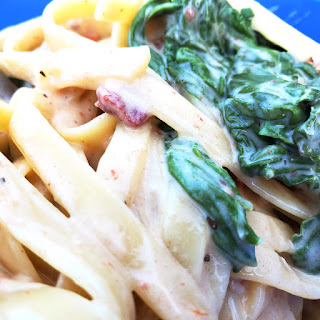 Sundried Tomatoes.  In my head they are full of flavor, sweet and tender, and moist.  In actuality, they are lacking in flavor, tough in texture, and oily yet dry in taste.  With dozens and dozens of recipes using sundried tomatoes to produce wonderfully creative meals, another attempt was given in Linguine with Spinach and Sundried Tomato Cream Sauce using a high quality brand of sundried tomatoes.
Modifications Made:
Pasta was increased to 12 ounces instead of 8, garlic was increased to four cloves, mustard greens replaced spinach, and basil was omitted.
Scaled for Likability: No, Thank You
Having now made real cream alfredo sauce a couple of times, this alfredo sauce was lacking in depth of flavor.  It reminded me of the alfredo sauce from a jar, thick and creamy with little flavor.  The sundried tomatoes were tender and did offer a touch of elegance but not worth the effort or oily residue.  Sauce may have been lacking in flavor but it did make a nice creamy product that bonded well with the noodles and greens and would have coated chicken nicely, too.  Too bad it needed a more in depth flavor.