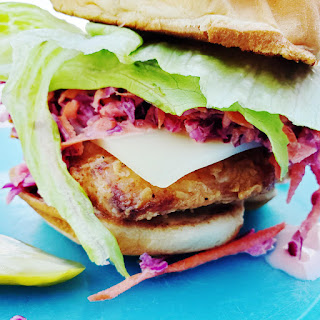 Don't know about where you live but the hype over the supposed missing Popeye's chicken sandwich has been crazy.  People who I know who don't even eat Popeye's are even discussing/debating the reasons.  Throwing myself under the bus, all this discussion about missing sandwiches has lead me to want a chicken sandwich, but not a drive through soggy version.  A homemade, fresh, crunchy on the outside, moist and tender on the inside, pure 100% chicken breast sandwich.  Want something different than my favorite go to chicken sandwich with honey mustard, provolone cheese, and lettuce, I settled on a sandwich out of the ordinary. A Summertime Fried Chicken Sandwich.
Modifications Made:
Chicken breasts were pounded to tenderize, to reduce cook time, and make sandwich bitesizable.  A burger too tall with toppings makes a mess.  Tony Chachere replaced seasoning in both the marinade and flour mixture.
Scaled for Likability: Great, No Thank You
Chicken: Great
Breadcrumb exterior was crunchy without excessive amounts of batter.  Breasts tender and full of flavor but too thick.  Next time the breasts will be cut in half to reduce thickness.
Slaw: No, Thank You
Following instructions even to the inclusion of mayonnaise produced a slightly sweet yet tangy slaw that complimented the spicy of the chicken marinade and batter.  The problem with the slaw was the iconic Pepto pink color the sauce took from the red cabbage.  In the video, it shows the cabbage being made directly before serving on the patty.  This quick turnaround of the slaw would eliminate the pink coloring but would reduce the flavor melding.  Slaw would simply taste like vinegar mayo covered cabbage not slaw.
Sandwich: Sandwiches consisted of honey dijon mustard, chicken patty, swiss, slaw, and lettuce. The swiss did not compliment the slaw, and the lettuce offset the slaw. Bacon as shown in the video would not have gone with the slaw nor would have any other cheese for that matter.  The slaw kinda stole the show.  Next time the sandwich is made, slaw would be served on the side or not at all.  Guess what I am saying is that the sandwich was good but my go to favorite was better.