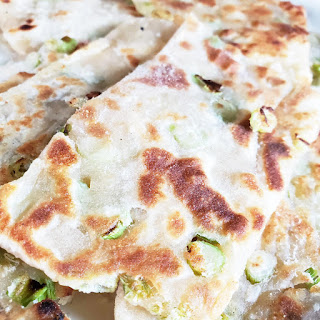 A few weeks back, I watched an episode of BA;s Test Kitchen where Molly Makes Sour Cream and Onion Biscuits.  The teen counterpart takes after me and loves, loves, loves biscuits.  Plain, jelly, honey, bacon/egg/cheese, sausage gravy, hot, warm, cold.  The other table counterpart not so much.  The two table counterparts love sour cream and onion chips.  Thin, wavy, ridged, Pringles, kettle cooked.  Me, not so much.  As in I will eat one chip and be done for the year.  However, these biscuits were calling my name for weeks and weeks so when Easy Scallion Pancakes with Soy Dipping Sauce was discovered on one of my video feeds a few days ago, I knew immediately they had to be made for lunch.
Modifications Made:
Dough: Salt was increased to three-quarters of a teaspoon instead of half.  Knowing from making homemade flour tortillas, more salt is better than less.  Salt consumption can be reduced in the sauce is the tortilla/pancakes seems salty.  Scallion were switched for green onions. Dough was allowed to rest of over an hour before pancakes were rolled out.
Sauce: Ingredients seemed excessive and I worried it would take away from the pancake itself.  Therefore, the dipping sauce was simply one third cup soy, one third cup chili sauce, and one teaspoon of sesame oil.
Scaled for Likability: Great
Easy in theory and title, not easy in production.  Green onions kept sticking to the work surface and falling out.  What worked better was to roll the onions like instructed but to roll out the pancake as in making Mandarin Pancakes for Moo Sho Porken with liberal amounts of oil.  Oil was needed anyways to keep the pancake from sticking to the skillet and the oil kept the onions from falling out of the dough.  Worked like a charm.  Unlike Mandarin Pancakes, thicker is better than thin, cripsy is better than soft, and leftovers do not heat up well as they become limp and sticky.  Best to eat straight away.  Next time are made a bowl of egg drop soup will be served alongside.  Cheap, savory, and filling.