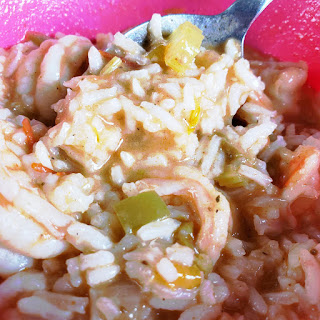 Just as Tex-Mex varies depending upon ones location in Texas (North/South/Coastal/Central), gumbo, jambalaya, and etouffee varies depending upon the location one is eating in Louisiana.  Well atleast I would think it varies depending upon location as I have never actually eaten in LA.  Just driven though a few times along the coast line.
In attempts to educate myself on the differences, it turns out the internet does not agree from one reputable website to another.  Not really caring actual name of the dish, I wanted a dark roux, fish based stew, with shrimp and rice.  Basing only upon the versions eaten in Central Texas, this Shrimp Etouffee seemed to fit the memories best.
Modifications Made:
Cayenne and white pepper were omitted as the teen table counterpart does not care for spicy dishes.  As with all good things, the longer the simmer time the better the results.  Gum-balaya-ffee was simmered for just over an hour before adding shrimp and another 30 once the shrimp were added.
Scaled for Likability: Good
Having never had anything other than chain food gumbo/jambalaya/etouffee and not having actually had any of the three in more than ten years, this table consumed the entire dutch oven contents leaving one small two cup bowl leftovers.
Slow cooking a roux is the key to success with most meals of this nature.  Too quick and it burns, too little and the flavor is weak.  It is the same with enchilada sauce.  Low and slow.  After adding the clam juice I was concerned for the final outcome as the juice was, well, fishy.  More fishy than actually boiling shrimp heads and casings for stock.  If more time was available, shrimp heads and casings would have been boiled with a bay leaf, celery stick or two, salt/pepper, and a dash of cayenne to create their own stock for an even deeper base.  Next time.