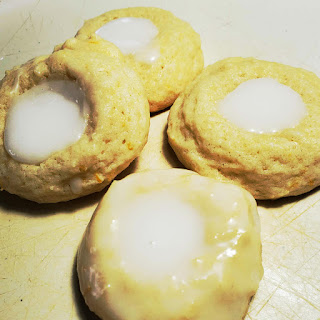 Growing up there was a local Italian restaurant who served the most amazing simple lemon cookies for dessert. They had other fancy desserts like tiramisu, gelato, and fried ice cream but the local regulars knew to order lemon print cookies. The restaurant has long been closed but forever will remain known for their cookies. Soft Lemon Cream Cheese Cookies were not the favored cookies of my youth but they are worthy of eating more than once.  With or without the complete covering of icing.
Modifications Made:
Lemon zest was not measured.  It was whatever quantities came off two  very large bright yellow lemons.  One half teaspoon of lemon extract was also added as numerous reviews stated they were not lemony enough.  Lemon juice replaced water for icing just as I would have for my T&T lemon bread recipe.
Scaled for Likability: Great
Nothing made so far in this journey has produced a result so drastically different than the pictures shown in the original recipe.  Cookies pictured were bright yellow with a slightly soft, sticky inside much like a lemon bar would be.  Resulting baked cooked were moist but not sticky and were the color was that of normal sugar cookies.
Cookies by themselves were not sweet and did require the lemon icing.  Once the cookie and the icing cooled, the icing became a hard crunchy layer to the offset the moist tender cookie.  They were heaven!
And easy. Nothing better than easy tasty cookies.  Next time, these are going to be made in a double batch and the second half will be frozen in dough balls.  Then when the mood strikes, dough balls placed on a cookie sheet while the oven warms will result in a cookie warm enough to press a spoon into for icing.  Tiny dough balls baked then completely drenched in icing would be good, too! Might have to try that first: lemon cookie bites.