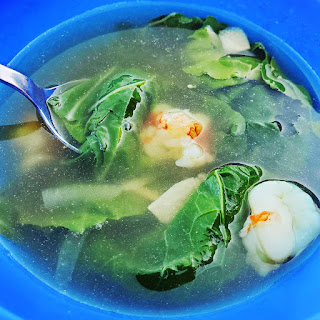 Simple dinners, the quest for every blogger, working parent, busy American lifestyle.  Shrimp Canh was a quick and simple dinner ready in less than an hour with the majority of time being used to clean and devein the shrimp.
Modifications Made:
Instructions for this soup were very simple.  Saute an onion, add water/fish sauce/, cook the greens till half the volume, add diced shrimp and ginger.  Quantities were given but were also more of a guideline than actual instructions.  In the tweak notes it said five to six ounces of chicken/pork/fish could substitute shrimp.  Figuring a dozen shrimp were supposed to be equal to the five or six ounces and not enough for three people without additional side dishes, shrimp was increased to a heavy half pound.
Scaled for Likability: Good
Holy moly! This was the first time I had ever cooked with fish sauce and let me tell you what.  Living half mile from bay waters and surrounded by tidal flats, I have never smelt such fishiness from actual fish itself.  Fish stock has been made in the past with the boiling of fish heads/bones/shrimp heads/tails and it did not smell as bad as this fish sauce.  Boy howdy.
Nose smells were avoided and dinner was carried on.  Luckily, once all ingredients were mixed and allowed to mellow into each other, the fish smell dissipated leaving it is wake a clear broth, simple tasting soup.  Soups are never this simple and take hours to prepare (except egg drop which is even easier than this soup).  It was the simple ease of this soup causing me to make it and it was good with room for improvements.  This simple soup would have been better with mushrooms instead of shrimp and added bean sprouts for some crunch.  A splash (tablespoon or two) of soy added to the broth would have gone a long way to enhance the flavor and still resulted in clear broth, just a little darker.  A packet of unami powder would also have been great, too.  The recipe states any green can be used but after having made this with chard I would lead away from spinach as it would not hold up well and might become soggy.
If made again, it will need to be served with a filling side dish like fried rice or egg rolls or maybe even potstickers.  Something with substance.