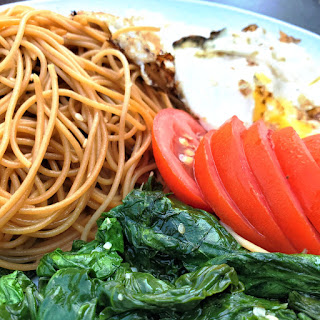 Help, I am stuck in a rut with new meal choices.  Simple dinners.  After the failure of Renewdled Lo Mein and the success of Dragon Noodles last night, I spent way too much time late last night looking for another new simple noodles recipe.  This one to incorporate the usage of a fresh slice of tomato.   Apparently simple noodles are not what cooks want as they are unappealing to the eye of the camera.  True as that may be, only cooking dishes viewed through the eye of a camera limits ones culinary experiences.  Luckily for me, I found this other cooking blog who on the surface seems more concerned about good, cheap food than Pulitzer pictures.  Sesame Noodles with Wilted Greens and Fried Eggs, whose pictures are astoundingly beautiful by the way, was the winner for dinner tonight!
Modifications Made:
Noodles and sauce were doubled to a one pound box of whole wheat pasta, spinach was replaced with garden fresh mustard greens, and the egg was fried to hard yolk instead of sunny side up.
Scaled for Likability: Great
What a beautiful dinner!  The reds, the greens, the white, and the golden brown noodles.  It was everything I stated I would have changed from last nights meal. And it was great.  Well, this plate was everything I said I would change as I don't eat fresh tomatoes.
The table counterpart said the white noodles were better than the whole wheat but I disagree as the texture and chew of the whole wheat added a much needed element to the simple noodle.  Eaten as a stand alone noodle the dish was great but pairing with the garlic greens and the egg was perfect.  A carb, a protein, a veggie.  A full balanced meal hearty in texture, rich in flavor, and easy on both the budget and time.  A winner all around and a dish added to the T&T recipe, with or without wheat noodles.