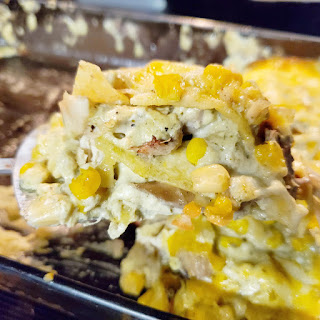 Being stuck at home for two and half months has taken its toll.  We have not gone out to eat/take out/fast food once, we have not taken a walk in the park, strolled the beach, biked at the wildlife management area since the second week of March.  In fact, except for the once weekly trip to the grocer, we have not left the house and neither of the other two table counterparts have left the safety of the car on these trips.  They stare longingly out of the car window while I stand in line waiting my turn to shop.  Crazy times.
Covid be damned we have done to visit family (a fellow hermit like ourselves who lives off in the country) since school ended Friday.  Dinners are going to soul filling, rib sticking, heartwarming meals such as this Layered Chicken Chili Relleno Casserole.  Desserts will be plentiful, one for everyday there, and all new.  Life will be OUTSIDE!
Modifications Made:
A very large whole chicken was boiled in a heavily salted water along with one roughly diced onion, two garlic cloves, and one tablespoon of pepper.  Once cooled, the chicken was deboned and diced with half the chicken and all the stock saved for dinner tomorrow.
In a large skillet, one diced poblano, one small diced yellow onion, and one bag of frozen corn were seared until a nice brown crisp edge appeared.  To a large bowl, diced chicken, four ounces sour cream, one tablespoon of chili powder/comino/cilantro, three quarters jar of green salsa, four ounces of colby jack cheese were mixed.  Once thoroughly mixed, poblano/onion,corn mixture was added and mixed again.
In a 9x12 pan, remaining green salsa was poured and one layer of corn tortillas was added. Then half of the chicken mixture, a layer of corn tortillas, the final half of chicken, and a final layer of tortillas.  The entire casserole was topped with the remaining four ounces of colby jack cheese to keep the tortillas from crisping and the moisture inside.  Casserole was cooked at 350 degrees until the cheese bubbled.
Scaled for Likability: Great
What was there really to go wrong.  It was basically a combination of green chicken enchiladas and corn poblano chicken casserole.  Served with a side of Spanish rice, a couple of slices of avocado, and an extra dollop of sour cream on top, the dish was a hit.  With all of the ingredients pre-cooked, this dish would have been easy to prepare over the weekend, tossed in the fridge, and cooked during the week.  Or prepared and frozen as a whole for a dinner later in the month.  Just thaw overnight in the fridge and cook until the cheese bubbles.  Very flexible, not that there was much in the way of leftovers between five people who worked all day cutting felled trees.