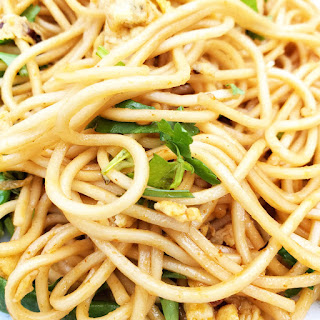 Every meal has its time and place.  From overly complicated and fancy at holidays, a savory and heart warming during the cold winter months, to a simple and quick get to the table.  Today was simple with Spicy Dragon Noodles and fresh picked Green Beans.
Modifications Made:
Noodles: Sauce ingredients were scaled to cover a one pound box of thin spaghetti instead of 4 ounces lo mein with exception to the red pepper flakes.  Only a half teaspoon of red pepper flakes were used as this sauce still had sriracha heat, too.
Green Beans: Red pepper flakes were reduced from a half teaspoon to quarter as I wanted to enjoy the freshness of the garden grown beans without my mouth being completely on fire.
Scaled for Likability: Great
Cilantro, was the winning ingredient!  Who knew?  The more Asian recipes read and videos watched, the more I have come to realize cilantro is not just a Mexican ingredient.  Of course, if I am being honest, I like cilantro to begin with and have a tendency to be heavy handed when cooking with fresh cilantro.  But still, even I have never once been tempted to use it Asian food.  Well from this further, if the recipe calls for cilantro, then cilantro will be added.
Quick, simple, fire breathing noodles with cilantro.  The heat was good and was felt more on the lips than in the mouth.  The sauce was just enough to cover but not enough to drown.  Thin noodles worked in a pinch but I can see where a large flat, thin noodle would have been better for more sauce coverage. Whole wheat noodles would have also worked wonderfully with this sauce and egg combination.  Omitting the scrambled egg and serving a whole fried egg on top (sunny side up or hard) would have been just as good, too.
Spicy noodles paired with slightly spicy green beans was the perfect combination.  The noodles were bland in color with just a splash of bright green from the cilantro and green onions.  Served alongside bright, fresh green beans and the entire plate was visually and orally appealing.  If fresh tomatoes had been available, a few slices of thick hardy tomatoes would have rounded out the meal.  Soft, fire noodles, crunchy, spicy green beans, tender, sweet tomatoes.  That is if you enjoy fresh tomatoes.