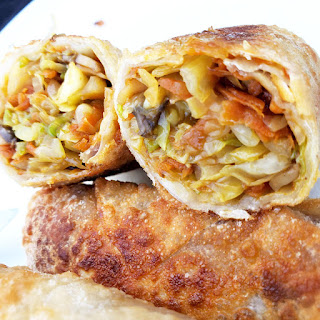 Pick your poison: less is more or can't have too much of a good thing.  When cooking, eating, savoring, and splurging on good foods, it is difficult to know where to stand.  There is never enough pumpkin pie and anything other than a 9x9 pan of lemon bars is too much.  Crab rangoons are only served two at a time which is all one needs as they are very rich in flavor and rich in cost.  Egg rolls are the same.  They are not as costly as crab rangoon but only ever come in single or double rolls and ordering five or six for myself makes me seem like a pig.  Six egg rolls and a side of stir fry veggies makes a great meal.
Having mastered, yes mastered the potsticker, Vegetable Egg Rolls were given a go.
Modifications Made:
Veggies were cut as thin as possible.  A good egg roll has a nice crunch to the veggies but they are also not raw.  Bean sprouts were added to the list of veggies.  Meat was omitted.  Egg rolls were fried, not baked.
Scaled for Likability: Great
In wrapping egg rolls, less is more.  Too much good stuff and the wrapper splits resulting in a soggy and greasy inside.  Each wrapper only held about a tablespoon of veggies before splitting.  Luckily, egg rolls are easy to wrap and easy to fry so making dozens went quickly.  As it turns out, when eating egg rolls in the comforts of your house, there really is no such thing as too many egg rolls.
Egg rolls were crispy on the outside, tender with a bite of crunch on the inside, and when served with warm Sweet Chili Sauce, each roll became a vessel of taste explosion.  They are no more or less time consuming than potstickers and if made in bulk, freeze fantastically.
Edit March 1, 2021:
These have been made several times and have finally settled upon the following ingredients to make 13 egg rolls:
1/3 small green cabbage, finely sliced
2 carrots, shredded
2 celery ribs, finely diced
4 oz mushroom, chopped
3 green onions, sliced
Knob of ginger, grated
5 oz bean sprouts, diced
8 oz bamboo shoots, diced
2 Tablespoons tamari or regular soy sauce
2 teaspoons cornstarch
1/2 teaspoon white pepper
Cabbage thru ginger are quickly stir fried and set aside in large bowl.  Stir fry bean sprouts and bamboo shoots.  Add to cabbage mixture and mix together.  In a separate bowl, mix cornstarch into tamari and add to veggie mixture. When adding mixture to egg roll wrapper, squeeze out excess water.