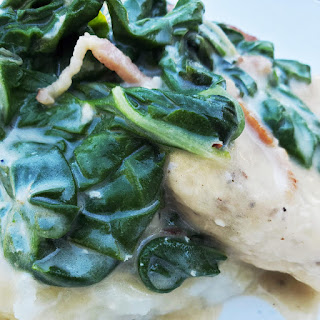 Cooking with homegrown chard has become my new favorite past time.  Recipes are actively searched containing not only chard, but kale, spinach, or any other green for that matter.  Chard is an easy substitute for all greens as it is tender like spinach with a more bitter undertone like mustard greens and holds up well when cooked like kale.  It is a truly versatile green and like all greens pairs well with bacon as in this Creamy Bacon Chicken.
Modifications Made:
Six strips of diced pepper bacon were browned to extra crispy stage to avoid any soggy bit later in the dish.  Upon removal of bacon, three chicken breasts, sliced thin to make six pieces, were fried in remaining grease and set aside atop of bacon to rest  while one large, finely diced shallot onion and two gloves of diced garlic were browned until translucent.  To onion and garlic, two tablespoons of salted butter was added along with two tablespoons of flour to create a thick light rue. Chicken bits stuck to bottom of pan were released with one cup reduced salt chicken broth and half cup of cream.  And additional half cup of flour was whisked into one cup of water and mixture was added to chicken/cream stock.  Chard and chicken was added to stock and allowed to simmer until chard was cooked to desired texture.  Gravy thickness was monitored to maintain thickness and salt and pepper were adjusted accordingly.  Bacon bits were added back to mixture directly before serving to maintain crunch.
Scaled for Likability: Great
Served over bacon fat infused buttery mashed potatoes, this creamy bacon chard dish would have been fantastic with or without chicken.  Next time this dish is made, I would like to allow the chicken to simmer in the gravy for an extended period to infuse flavor deep into the meat itself.  It would also have been good with a freshly shredded chicken using the homemade stock instead of the reduced stock for base.  In fact, the only adjustment the recipe really needs would be to have smaller pieces of chard making it easier (and less messy) to eat the creamy goodness.